Frankie Scott (1920-2004) is a singer, dancer, model, actress, and comedienne. Scott stepped into the entertainment field as a model in Atlanta, Ga. in the late thirties. She married country music pioneer Ramblin' Tommy Scott in 1940 shortly before he became a member of the Grand Ole Opry. She became a fixture on radio and Scott's road show dancing, singing and stepping into the shoes of the Minnie Pearl style character "Clarabelle," which she portrayed on radio and in several film shorts. When Tommy Scott ventured west to Hollywood, Frankie joined him co-starring in the Edward Dymytrk film "Trail of the Hawk," as well as films "Mountain Capers," "Hillbilly Harmony," "Southern Hayride," among others. When the Ramblin' Tommy Scott TV show, credited as being the first country music television series, hit the airwaves on television in the late forties, she debuted as a television pioneer dancing, singing and doing comedy on the variety series. She returned to television in the 1950s when Scott's Smokey Mountain Jamboree hit the airwaves airing in syndication around the country. Early television appearances also include Johnny Carson. She is the subject of Tommy Scott's top twenty Billboard hit "Rosebuds and You." In the 1960s, Scott retired from performing on stage and took a role as co-producer of Scott's road show, "Doc" Scott's Last Real Old Time Medicine Show, which included co-stars such as western film star Col. Tim McCoy, Al "Fuzzy" St. John, Sunset Carson, Billy Grammar, Junior Samples, Clyde Moody, In the Heat of the Night star Randall Franks among others. The show, founded by "Doc" V. O. Chamberlain in 1890, has performed over 29,000 times in towns across America and Canada up to the present.

Frankie Scott died Saturday April 24th, 2004 of a stroke at the age of 84. Her entertainment career spanned nearly three decades and ranged from singing and acting to comedy and modeling.   "It will be hard to go on without my Frankie but I know that she is now in a place where rosebuds will bloom forever," said her husband, Ramblin' "Doc" Tommy Scott.

Tommy was referring to his popular late-1940s hit song "Rosebuds and You," which he wrote for Frankie Tommy said "The last thing she said to me was 'I love you.'" 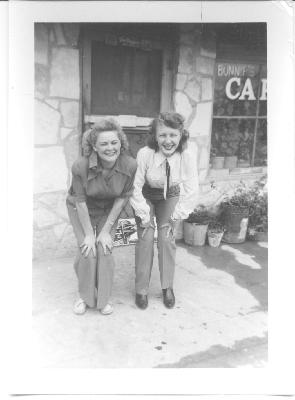 Frankie Scott and Carolina Cotton, in front of a Cafe, somewhere in the Southwest, early 1950. The two enjoyed a few shopping trips together, in-between shows. The tour went on the road through the month of February. They perfomed at many a theatre in Texas.